By:
In: Modern Houses
With: 0 Comments 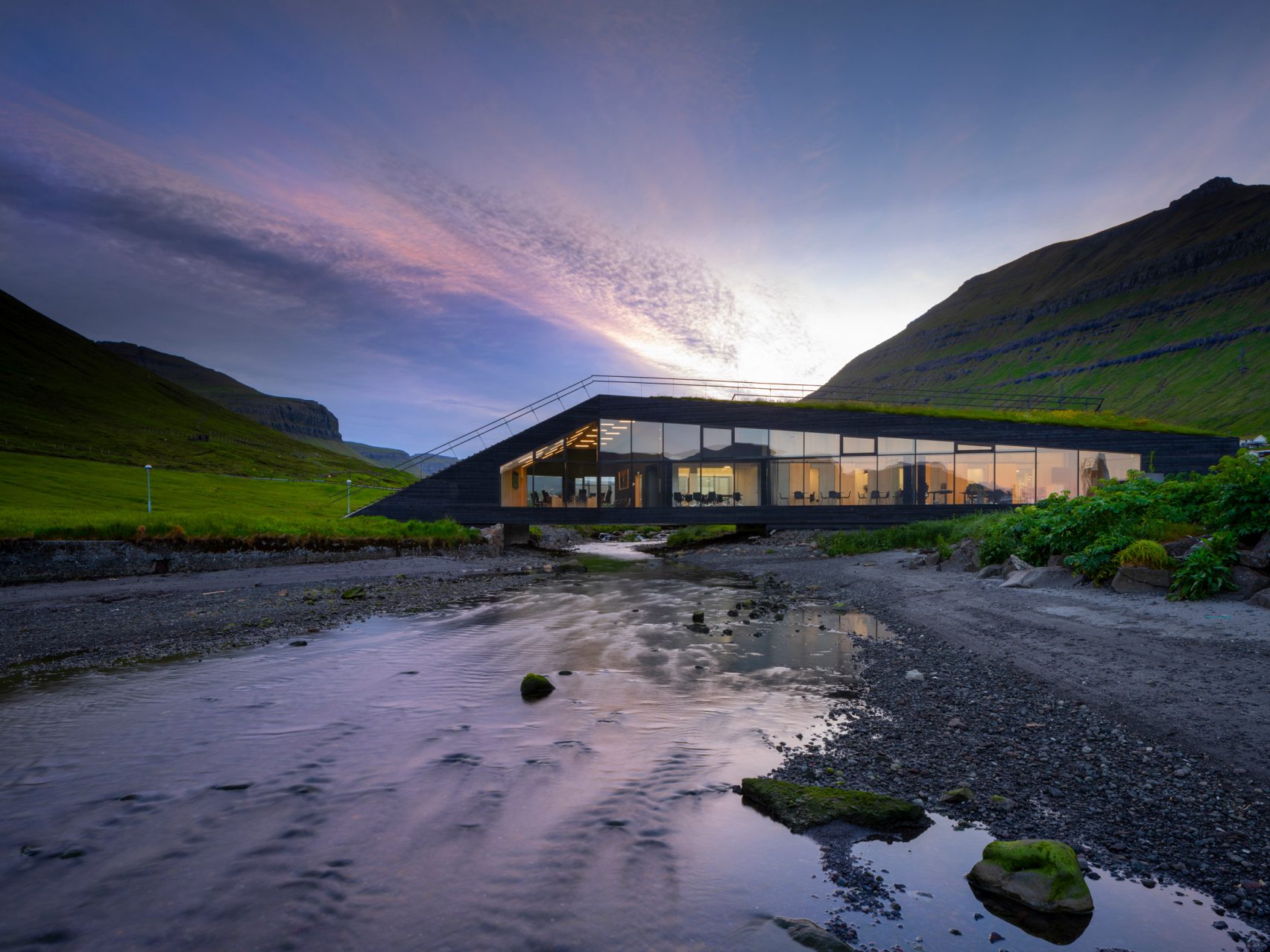 Designed to serve the municipality of Eystur, the town hall is located in the small town of Nordragota on the eastern coast of the Faroe Islands – a self governing archipelago in the North Atlantic that is part of Denmark.

This administrative area was formed by the merging of Leirvík and Gøta in 2009. The building stands across the mouth of the river that divided the two former municipalities.

Pedestrians can cross the river using a walkway that leads across the building’s green roof. 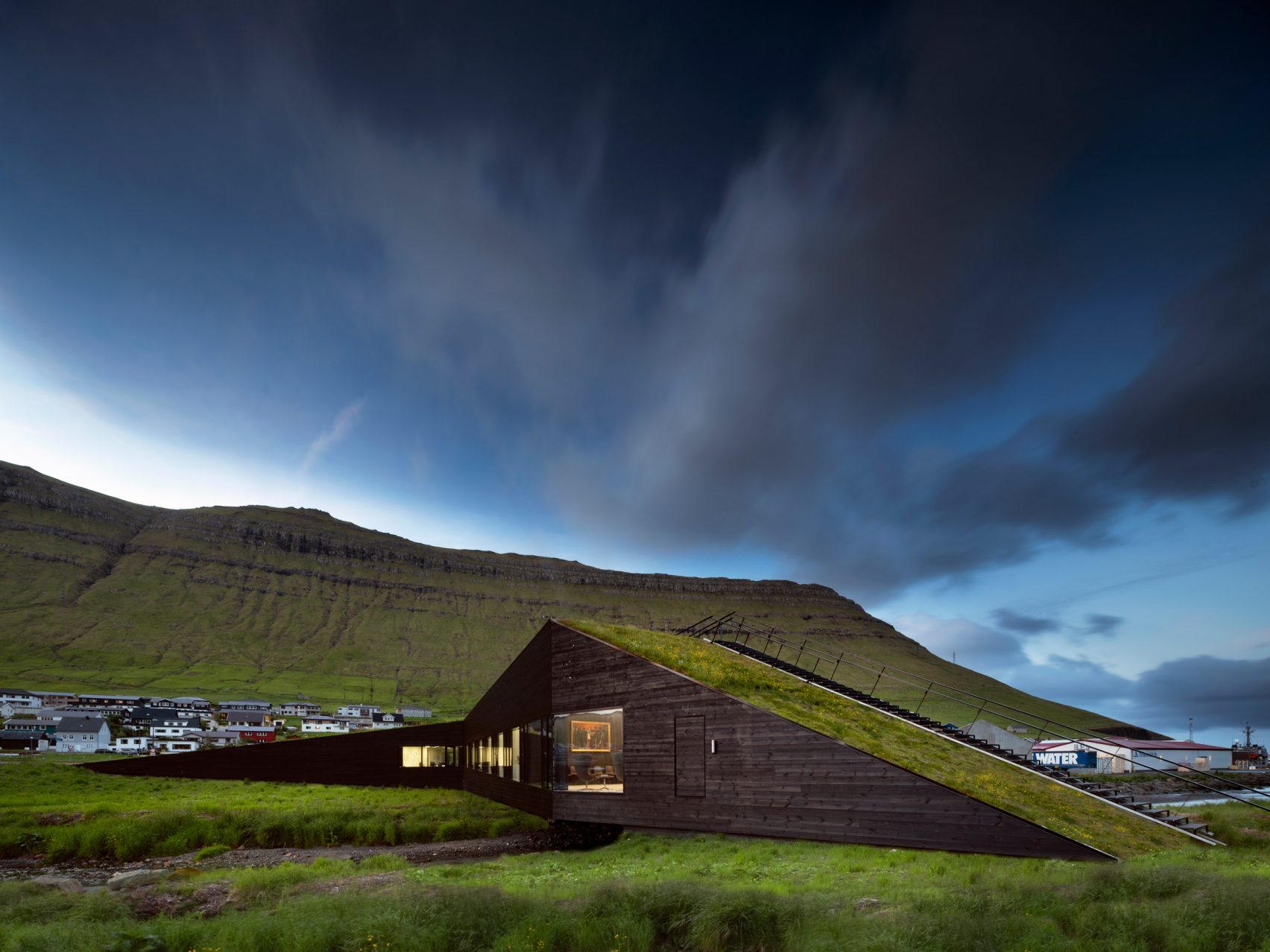 Entered on the town side of the river, the single-storey building contains office space for the municipality’s staff arranged along its landward-facing side.

Meeting spaces and the reception are aligned along the building’s seaward-facing side, with large glass windows giving views out across the water. The hall containing the town’s council chamber is situated in a large room, which has a circular glass-cover opening in the floor, directly above the river. 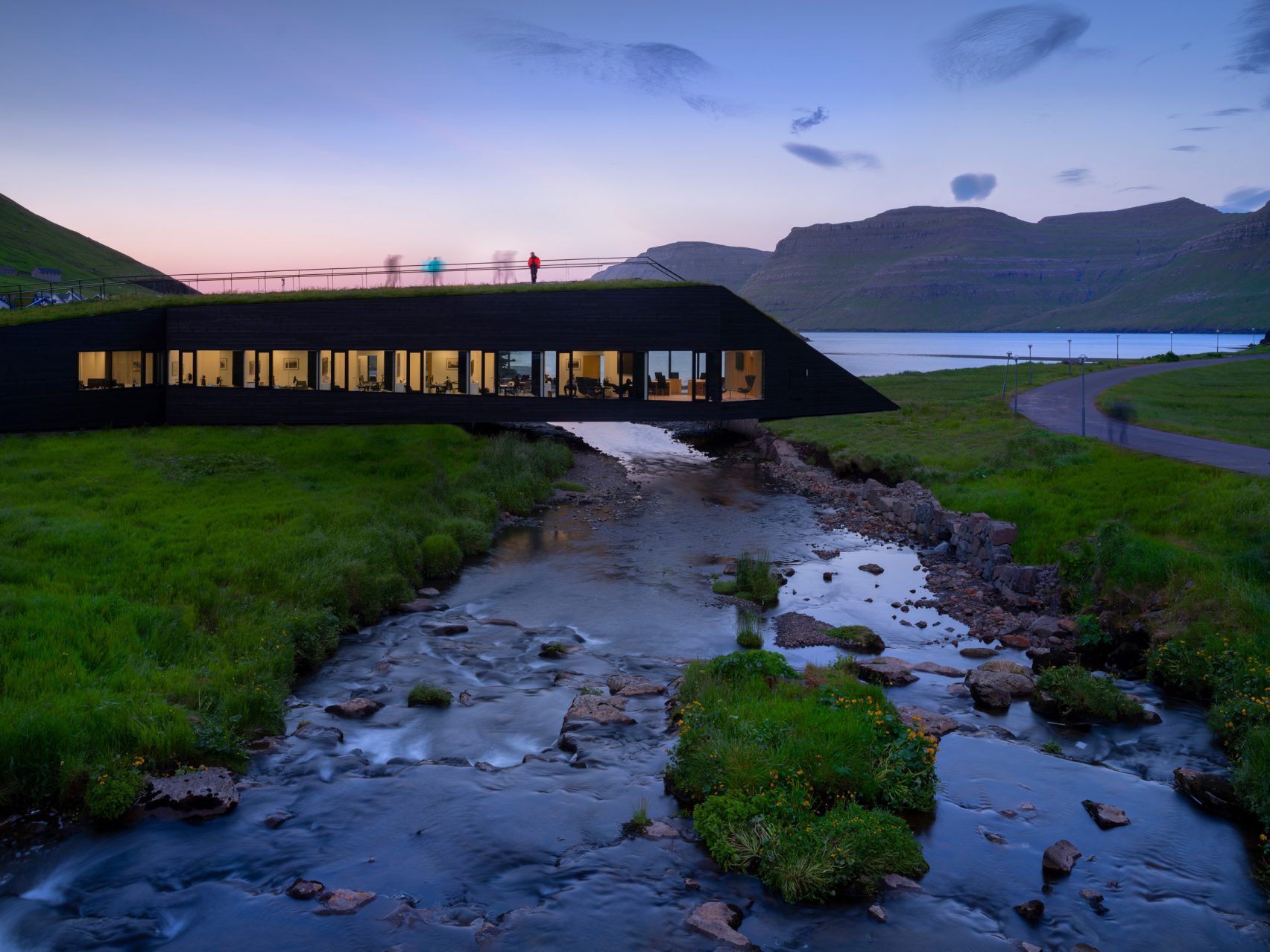 The design of the town hall was led by Henning Larsen’s Faroese partner Ósbjørn Jacobsen, the architect who was also responsible for the design of the Harpa Concert Hall and Conference Centre in Reykjavík, Iceland.

According to the architect, the design takes its form from conditions on the islands, but does not directly imitate buildings found on the archipelago. 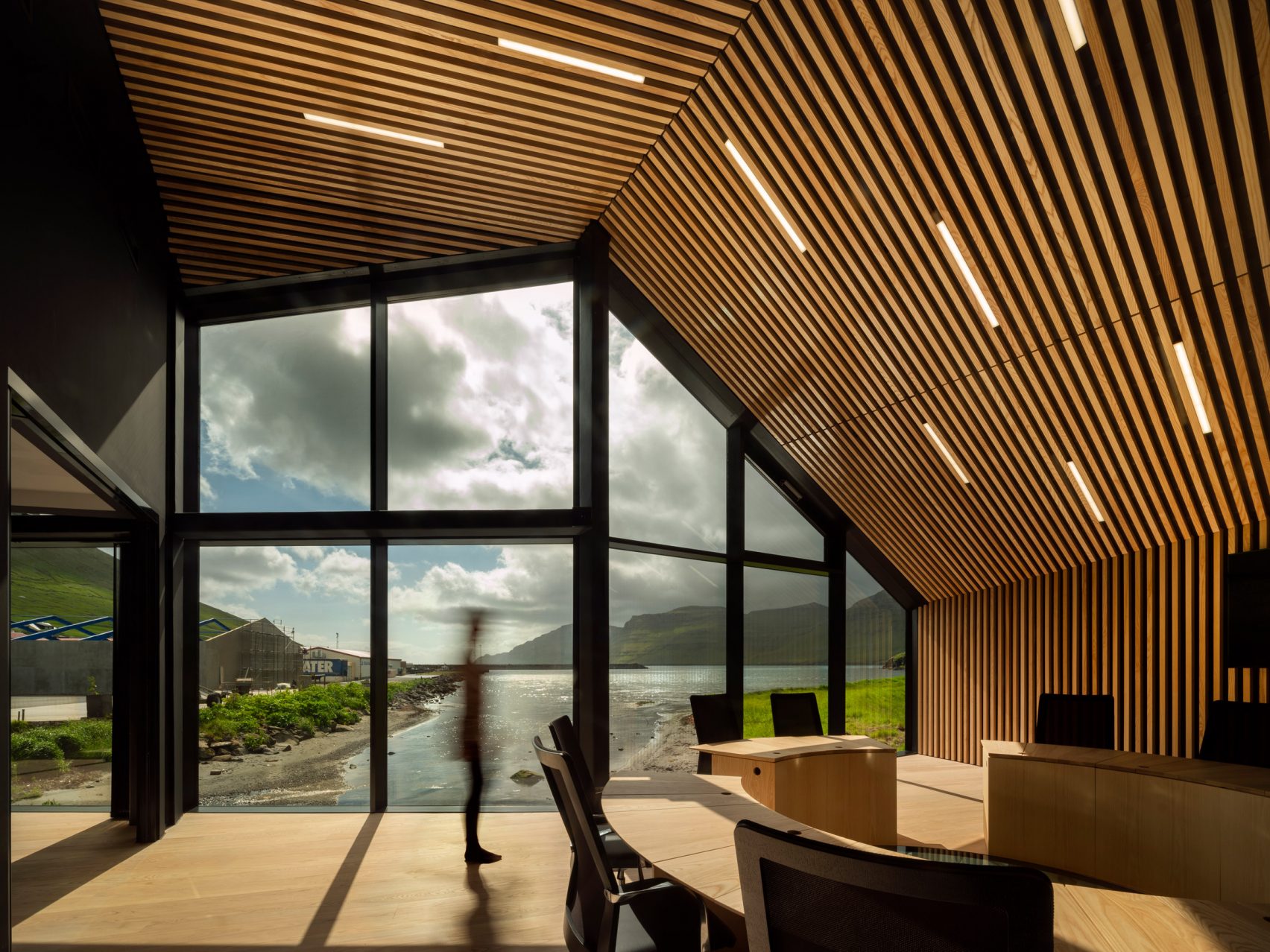 “I find it much more interesting to look into the underlying thoughts of traditional buildings.” 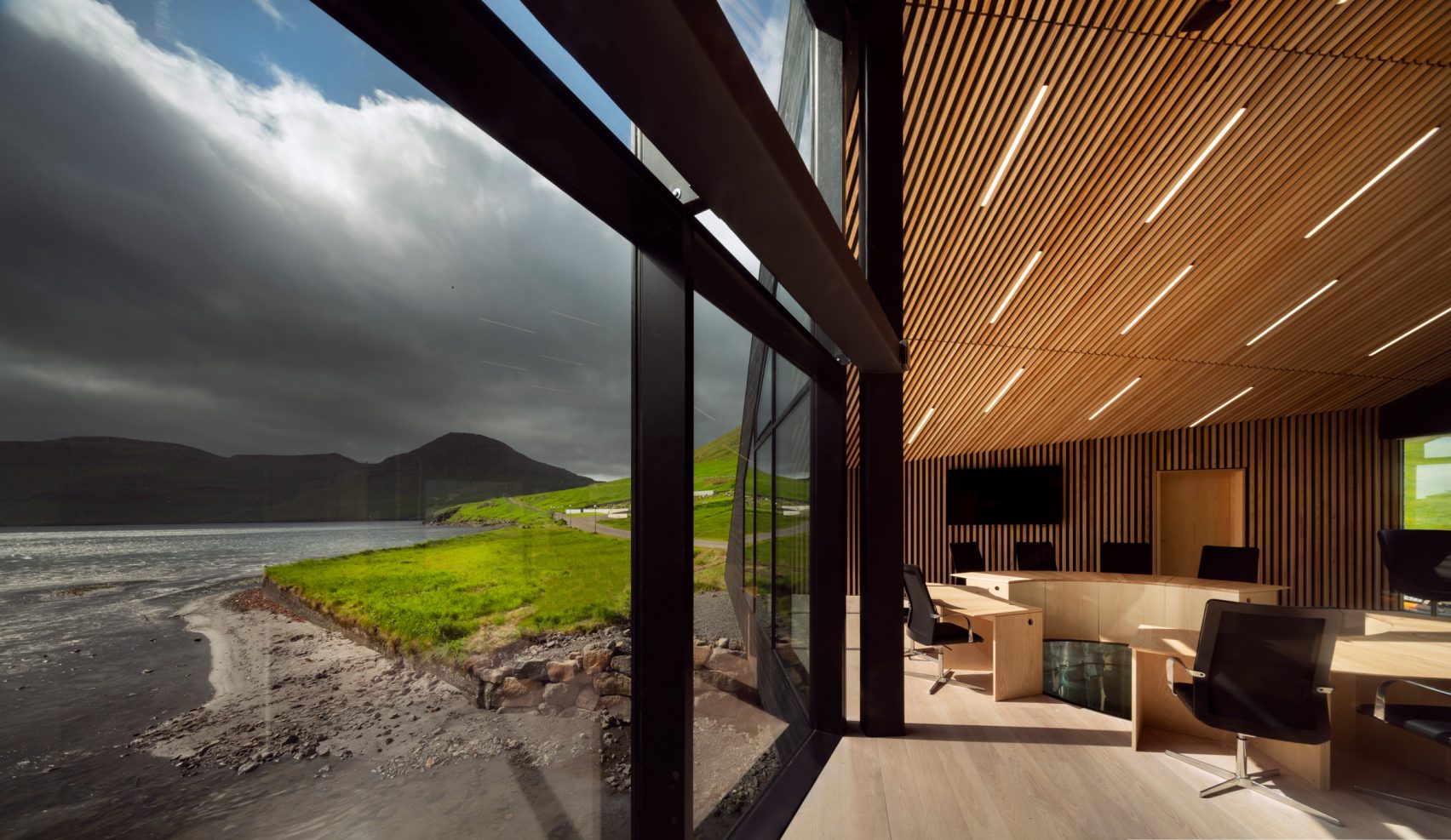 “A central theme in traditional Faroese architecture is the blurred line between nature and building, the fact that the spectator has difficulties distinguishing where the landscape ends and the building begins,” continued Jacobsen.

“The primary conceptual idea behind the design of the town hall is driven by the notion of this fleeting line between landscape and building. I believe that could be one way to approach modern Faroese architecture.” 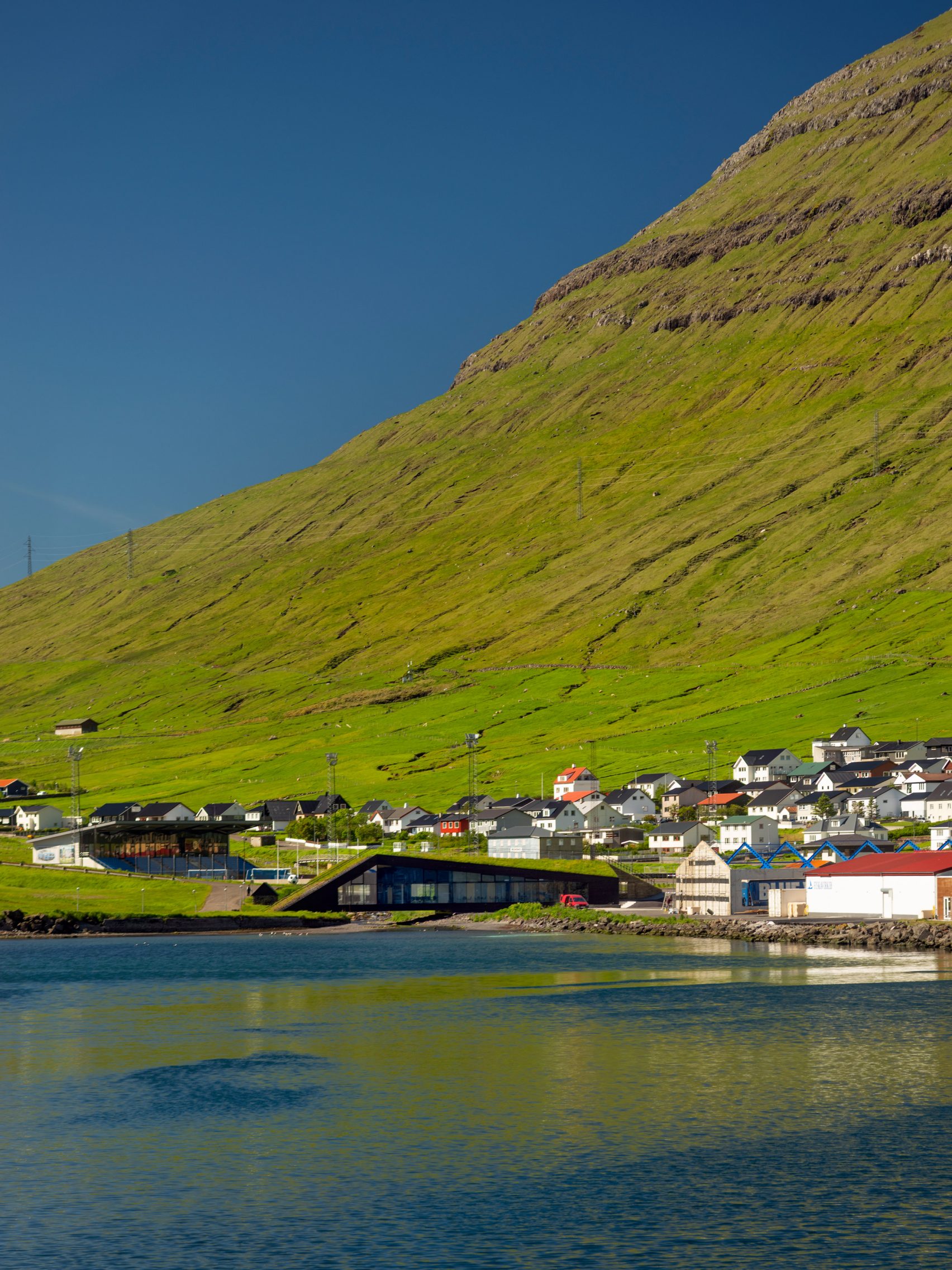 A sound and light installation created by artist Jens Ladekarl Thomsen, based on the sounds and structures found on the islands, is installed alongside the building.

In 2016, fellow Scandinavian firm White Arkitekter won a competition to design a sustainable housing development a short distance away from the Eysturkommuna Town Hall, on an uninhabited hillside near the town of Runavik.

2019-12-10
Previous Post: Cloud-shaped campsite designed to float among the trees of a Colorado valley
Next Post: Central Saint Martins students envision Renault’s “car of the future”